Rhonda is in Therapy 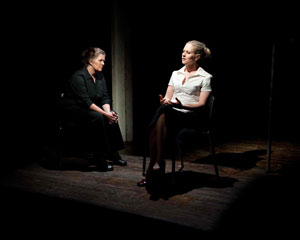 Rhonda is in Therapy should come with a warning: the subject matter is provocative and dark. It's impossible not to be moved by it, but it's no easy thing to absorb; with no interval, there's no chance to escape from it, and at times I felt too provoked, too weighed down.

Is this the sign of good writing, good direction, or a heavy hand? The show is laboured at times. While it starts with a good balance of light and shade, it isn't carried through the entire production and so, as the play progresses, it does feel somewhat heavy-handed.

Rhonda (Louise Crawford) is living a life where reality and imagination are so enmeshed she’s losing grip on her marriage and her sanity. After an unthinkably tragic accident, Rhonda and her Gerrman husband Lief (Ben Grant) lost their five year old son Jamie the day after his fifth birthday. Rhonda found refuge in a delusional world, leaving Leif to care for their baby daughter.

The play is set almost five years after Jamie’s death; Rhonda and Leif’s daughter is about to turn five and the stress of imagining that a child might live past this age throws Rhonda into turmoil. She seeks a new therapist and takes a lover who, ultimately, becomes integral to both her delusion and her way to salvation.

It’s the way in which the lover, The Student (Jamieson Caldwell), is used as a plot device that things come slightly unstuck. Despite the much needed and well-performed humour it brings to the production, it ultimately feels like a contrived way of bringing Rhonda towards her recovery. That said, the humour comes through some clever interactions between The Student, Rhonda and The Therapist (Kelly Nash), and is wonderful stuff.

The performances by the cast of four are all solid. There are moments where Nash, in the smaller role of The Therapist, steals the show. Nash brings a surety and subtly to a role that could easily have been overplayed. The scenes where The Therapist and Rhonda discuss the death of Jamie are stunningly performed, something evident on opening night by the several occasions where the audience froze as one entity, every parent in the room unable to breathe from the very idea of something so unthinkable.

Crawford does an admirable job playing the complex Rhonda. There are several moments of sheer brilliance in her performance, particularly when opposite Nash. Unfortunately, some of the heat between Crawford and Grant and Crawford and Caldwell in the more powerful moments of the play don’t match that intensity.

Caldwell is perfectly cast as the alluring young student, and while it was hard to get a sense of the love that he claims for her, this is likely more about time and script than performance. Grant is powerful and convincing as the ultimate husband who keeps on giving despite serious obstacles. On opening night he seemed to relax into the more two-dimensionally written Leif as the play progressed.

Rhonda is in Therapy is good writing and ultimately a powerful piece of theatre. While there are some unwarranted distractions – the voiceovers particularly do not work well and there are some scenes where the lead up to climactic moments is rushed and clumsy – the piece as a whole works well. It explores difficult themes with care and inventiveness. The performances will at times have you laughing, holding your breath then fighting back tears.