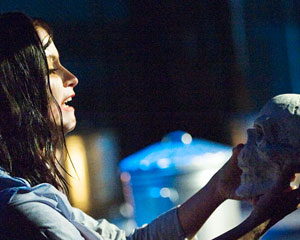 We are used to modernisations, film versions, edited versions of Shakespeare's plays, but to date none of them come close to The Rehearsal, Playing the Dane brought to us by the Irish theatre company Pan Pan as part of this year's Melbourne Festival.

Entering the theatre a sign on the door reads: Warning: onstage smoke effects, gunshots and A DOG (capitals the writer's). The performance begins and we find ourselves being addressed by The Academic (Sue Tweg). Holding a Great Dane (real, live, dog) on a lead, she waxes lyrical about the differences between the three earliest known versions of Hamlet and the philosophies and beliefs of the 16th century, commenting on how all these impact on the interpretation/reading/performance of the play. It's like being in a university lecture theatre. The restlessness of the Great Dane seems to echo a growing uncertainty amongst audience members as to what exactly they are about to experience.

When the 'real' action begins we find ourselves drawn into an audition process, with three contenders for the role of Hamlet. This first half, in particular, seems to rely on the audience's familiarity with the work, launching out at tangents from the text, interweaving comment on actors and performance with some truly moving moments. Whilst I enjoyed the irreverence and game playing with both text and characters, I found myself cringing a little at the fact that my companion was a self-confessed novice to Shakespeare having, like too many of us, been turned off his works at school. Did you have to be really familiar with the play to enjoy this performance?

Thankfully the answer is 'no'. With Hamlet cast, the second half focuses on the play itself whilst continuing to be selective with the text and still playing with character and performance – don't expect a straight rendering of the work. Now a knowledge of the play seemed to matter less and it was easy to be drawn into the dramatic heart of the play, only to be shocked back to reality by something as simple as a door slamming, the clash of a rubbish bin lid, or a long drawn out dramatic pause which prompted mutterings from at least one audience member suggesting that there were problems with the sound system.

The design is simply but effective: an open stage, mirrors at either side, swords on a stand at the back, a long refectory table (complete with wedding cake!) and two steel rubbish bins. The floor boasts a Danish flag. In the second half the rubbish bins multiply to take up much of the stage space and the flag disappears. The actors are in street clothes and the roles of the players and gravediggers are acted by drama students from Trinity Grammar School in Kew, some of them wearing their school uniforms.

Somehow the director, Gavin Quinn, manages to hold the chaos together and the result is a performance that brings comedy and tragedy together, changing from one to the other as with the toss of a coin. Perhaps the whole is best described, as in the program notes, as a riff on Hamlet, playing as it does with the themes of the play and with the process of performance. The ease with which the actors move from manic, comic activity to dramatic stillness, parody to full-on performance, is impressive. Laugh-out-loud moments are contrasted with others when the musical magic of Shakespeare's verse is allowed to command the stage and our emotions.

Be warned, this interpretation of Shakespeare's Hamlet is totally different from any version – film or stage, professional or amateur – that you may have seen. It is alternately hilarious and deeply moving; making fun of the theatrical, yet respecting the power of the text.

And the dog joins the actors in the final bow.


Part of the 2011 Melbourne Festival