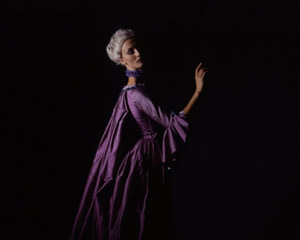 Stephen Baynes, resident choreographer of The Australian Ballet, is often referred to as the “Poet” of the company. As the title of the AB’s latest double bill suggests, it is here in the re-visiting of two of his works, Requiem and Beyond Bach, that he presents his own elegy. The two pieces, though very different in style and mood, are together a reflection and celebration of spirit; of life’s journey – here on earth and afterward, as well as in the origins and basis of classical ballet itself.

Baynes admits to not being a particularly spiritual person. And yet, through Requiem, the first piece in Elegy, he has created a wonderful dance that ponders what might happen, or where we might go, on the cusp of death, at the time of death, and shortly following. The result is a piece that stirs the senses in a most extraordinary way.

Central to Baynes’s creation is the use of Gabriel Faure’s choral/orchestral music, Requiem Op 48. The already evocative music of the requiem mass, performed by Orchestra Victoria, is in this work made all the more powerful with the rare on-stage presence and performance of twenty-six singers from the Victorian Opera. The soloists, soprano Janet Todd, and baritone Gary Rowely, are sublime.

Richard Roberts’s set is one that creates a sense of changing states, physical and spiritual. With the use of moveable screens the space transforms from a recognisable walled space, into a void that could be the transient state sometime or somewhere after death. As Nigel Levings and John Berrett’s lights move upon and behind these screens, the scene and dancers change from being in the solemness of darkness, to being flooded with a harsh, white light, to being bathed in a golden haze. This combination of lighting and screens is perhaps most effective physically when the screens become transparent to reveal the choir and soloists behind them, and then metaphorically, when they reveal the warm lights that await the dancers on the “other” side.

A sense of death is created by the music and the dancers dressed in black, and it is in this piece a constant presence. However, due to Baynes’s lyrical choreography there is also a lovely sense of peace and acceptance. Baynes has chosen to feature a lone, aging woman (performed by one of Australia’s most celebrated ballerinas and former AB artistic director, Marilyn Jones) to weave throughout the dancers. This woman is perhaps someone who is facing the end of her life, but one could just as easily interpret the woman’s presence as being a personification of death itself. Given the atmosphere that has already been created, and that she does not dance, her presence is however somewhat unnecessary.

Fittingly for a piece that is about something bigger than our selves, Requiem features few solos. As one would expect at this level, nearly every performance is as good as the next. Principal artists Andrew Killian, Kevin Jackson and Robert Curran display an impressive mixture of strength and gentleness, a perfect accompaniment to the femininity of Kirsty Martin, Madeleine Eastoe and Lana Jones.

There are times when this piece seems to flow over you, so much so that it borders on being repetitive, but there are just enough unexpected combinations of timing, movement, and lifts to keep interest. Above all, despite its powerful elements, there is an overwhelming feeling of tranquillity surrounding this piece, and the sense that what will come next will simply be a continuation of the journey we are already on. This notion is one that certainly reaches beyond that of the theatre.

The work is set to music that is a combination of three pieces by Johann Sebastian Bach. Bach’s classical music is a product of the Baroque period and like classical ballet its focus is on structure and form. But, whilst paying homage to this and ballet’s origins, it is what can be found beyond this discipline that Baynes seems interested in exploring.

Baynes’s choreography in this piece is trademark classicism. It is full of timed movements, arabesques, and structured lines. But from these come a wonderful demonstration of the joyous spirit and a presentation of these movements in a neo-classical form. Bach’s music is made for dance and featuring several changes in tempo, and highlights, it allows the dancers an opportunity to showcase themselves. Again Andrew Killian shines, as does Adam Bull, Amber Scott, and Juliet Burnett.

Set designer Andrew Carter and costume designer Anna French have created a grand setting to introduce the Baroque period of Bach’s music, but they have skilfully combined this scene with more modern elements. There’s a curling staircase and marble pillars, and a lone woman, in an elaborate Baroque style dress and wig, appears to float through the space, while bathed in a golden light. But there’s also an arched window looking out to the blue sky, a view to what lies beyond the world of which they know, a decorative gold star-like form hanging from the ceiling, and dancers dressed in understated, soft white.

There are elements to these works, in particular the roles of the two lone characters that traverse the stage amongst the dancers, which are a little perplexing. In both of Baynes’s pieces however, one needn’t delve too far into what it all means to be able to appreciate what is presented. There is accessibility to these works and at their heart is dance and music, and a display of how these, combined with the perfect setting and design, are enough to create something that is indeed a lot like poetry.

With Orchestra Victoria and Victorian Opera