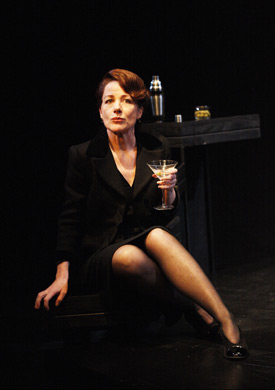 Five seemingly plain, unremarkable women; a cleaner, a backup singer, a librarian, a junior journalist, and a nanny, all want to be somebody, anybody but themselves.

Each of these fictional ‘nobodies’ is touched in some way by the lives and music of some of the most well-known female singers of the past, and in recounting their stories of their brushes with fame, the women discover, as do their audience, that the women they aspire to are in many respects not all that different to themselves.

Songs For Nobodies began when MTC’s Artistic Director, Simon Phillips, saw Bernadette Robinson sing. He was staggered by her ability to “reincarnate” the voices of some of the singing greats, and knew he had to have her in one of his works.

In 2002 Philips and the now well-known Melbourne playwright Joanna Murray-Smith, had great success with the one woman show Bombshells, starring Caroline O’Connor. And so Phillips decided to commission Murray-Smith to write a show for Robinson.

The result is a work that is out of the ordinary for MTC and an interesting choice for its final show of the 2010 season, but one that really highlights the quite astonishing diversity and musical talent of its sole performer.

As a playwright, Murray-Smith has become renowned for her wit, most recently in the glitzy and rather over the top Rockabye. In this work however, she has given only a couple of the characters any really amusing or even gritty lines. The women’s stories are mildly interesting, but very few of them reveal moments of great depth or emotion, certainly not enough for the audience to form a long-standing attachment to them.

Robinson however, under the direction of Phillips and Assistant Director Gary Abrahams, gives each of these characters a mixture of fragility, robustness and honesty, moving seamlessly between characters and accents. As the librarian from Nottingham, one of the few characters whom Murray-Smith has plied with any real gumption, she really takes command of the stage and her audience.

The most wonderful moments come when Robinson sings, for it is then that she can really make the show her own. Time and time again she delivers note perfect songs, moving from the sweet sounds of Judy Garland, to the country ballads of Patsy Cline, singing in French as Edith Piaf, delivering the smoky jazz of Billie Holiday, and finally the Operatic Italian of Maria Callas. All the while she is supported by the band, which is led by Musical Director, Ian McDonald. Unforgettable is Robinson’s Non, je ne regrette rien as Piaf, and her portrayal of Callas singing Vissi d’arte from Puccini’s opera Tosca, for which she receives a standing ovation.

Andrew Bailey’s set, from a visual and functional point of view, is for the most part unnecessary. Behind are screens projecting images of stars and water but these seem rather an after-thought, without doing a great deal to enhance the story telling or atmosphere. On one side of the stage is a seemingly useless, and unattractive, set of stair-like blocks. On the other, a grey wall with cavities, each housing various drinks and drinking canisters that Robinson uses as props and to differentiate between the various characters. More effective in achieving this however, is the tailored black dress and jacket that Bailey has designed for Robinson. Simply altering the way she wears the jacket, or removing it all together, is enough to create the personality of the various characters and the mood surrounding them.

Songs For Nobodies is perhaps not all together comfortable in its current form. To a great extent it seems trapped within the confines of the Fairfax Studio, and one would have to say the expectations surrounding the type of works that are usually produced by the MTC. Whilst the Fairfax is quite an intimate venue, Robinson and her delivery of these songs belong in a smoky club, a basement bar, and if the show can't be held in such a venue it could at least be made to feel as though it is.

This is definitely a show that will appeal more to those who remember the days of these singers, or who at least grew up listening to them. Whilst it would be exceedingly difficult not to be touched by Robinson’s portrayal of them, and their songs, Songs For Nobodies is a rather light-hearted show when it could be, and perhaps should be, extremely moving. One can’t escape the feeling that it doesn’t quite know what it’s aiming for or how to achieve it, but Robinson sure does. We can only hope that this means we’ll be seeing and hearing a lot more of her from now on.