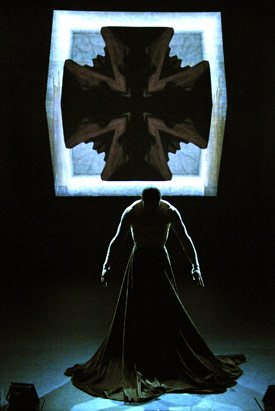 Expect the unexpected. This is a brief, intense and virtuoso performance, devised by Meryl Tankard, designed by Régis Lansac and delivered by dancer Paul White, first performed in September at the Sydney Opera House. It is hard to separate the roles in a performance that is clearly a creative collaboration between these three artists. Disturbing, even shocking, the dance and the video projection that accompanies it, probes the unconscious mind and its roots in prehistory, and moulds a work of art from the human form.

Within the intimacy of the Malthouse Theatre, the performance opens with an extended video sequence by Lansac, projected on to canvas, giving a deceptively low-tech feel to what is a brilliantly executed artwork, a kaleidoscope of human body parts – fractured elements of Paul White’s body - melding and separating in ways that are both beautiful and grotesque. The soundtrack, which uses the Magnificat by Joao Rodrigues Esteves, is persistent, often deafening: a cacophony of birds that are ominous and mechanical, or orchestral music that blares across the images. Instead of using surround sound, the soundtrack is fed from a speaker on the right side of the stage, again giving an impression of low-tech theatricality and an urgent, God-like ‘voice’ that dictates the onstage action.

There are many influences at play here, in particular the great dancer Nijinsky’s experience of mental illness and his choreography of Stravinsky’s The Rite of Spring. This music is used for Act Two and the performance follows the musical structure of that composition, with some of Nijinsky’s own choreography woven into the choreography by Tankard and White. Nijinksy’s first performance of The Rite of Spring in 1913 succeeded in shocking its Parisian audience with its depiction of violence and fertility rites. We are not so easily shocked, but as well as some nudity, there is plenty to disturb and astonish in this work. Visually, the drawings and paintings of Leonardo da Vinci come to mind.

Unbelievably, this is White’s first solo work. He appears onstage after the long build-up of images, his figure lit dramatically, and slowly unleashes a virtuoso performance that is a mesmerising act of concentration and aesthetic expression. A brilliant dancer as well as an aerobics champion, he has a mastery over every muscle in his body. This makes him capable of phenomenal physical feats, but he is also an artist and coordinates all his movements with exquisite grace. It is as if his brain is lodged in his body rather than his head, and his body speaks with a rare eloquence. Only the heavy rise and fall of his chest as he lies on the stage gives away the effort involved.

Once White is onstage, he dances through to the end, accompanied by video images or, in one particularly affecting sequence, dancing in harmony with his own projected image. At other times he is prophet, rising portentous from a voluminous robe. At others, antediluvian reptile, licking and creeping. The stage is bare apart from the lighting effects by Damien Cooper and Matt Cox: a cone of white light creates a mystic circle for White to explore boundaries and evoke rituals. His sense of the boundaries and limitations of the human body are gloriously counterpointed by his ability to transcend them in ecstatic moments of freedom.

Not all of us will appreciate every artistic allusion in this production, but it can be appreciated as a discrete work of art. The Oracle dissects form and space, explores birth, death and creation, and man as seer, oracle and prophet. The human body is presented in two dimensions refracted as if through a magic mirror and reassembled as a mandala, and in three dimensions - through the dancer - as an expression and reflection of the human as an expression of nature, the interface between the human and the divine.