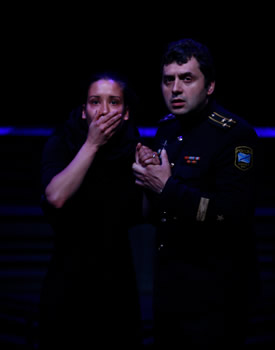 In 2000 the world watched and waited as a tragedy of horrifying proportions played out in the Barents Sea. Setting out on exercises on August 12, The Kursk, a nuclear cruise missile submarine, sunk after a series of chemical explosions ripped through the vessel. The disaster became an international incident when Russia rejected offers of assistance from Britain and Norway.

For Australian playwright Sasha Janowicz the process of bringing the tale of The Kursk and its ill-fated crew to the stage has obviously been a labour of love. Janowicz travelled to Russia to find out the truth behind the political spin and found overwhelming support from the families of officers lost in the disaster – he even received an anonymous package from Kalinangrad containing a submarine captain’s uniform complete with medals.

Passion for his material and for truth unfettered by media hyperbole has yielded great results for Janowicz. The production received critical acclaim in 2007 and was awarded both Matilda and Bell awards for best new Australian play. Director Michael Futcher also received a Matilda for his direction of the 2007 production.

The Kursk is taut and tense and not a single word is wasted. The style, documentary-like in feel, may alienate those who are seeking a human connection to the disaster, but it should be noted that it was the playwright’s intention to avoid the kind of cheap representations of grief that have become an all too common sight on the six o’clock news.

Janowicz eschews sensation opting instead for fact, for exploration of the small technical details behind which lay greater truths. Personally I found the level of detail overwhelming and, given the unrelenting pace of the production, I soon dropped any pretense of trying to make sense of minutiae of the rescue mission.

Green Room award winning director Michael Futcher brings a tense sobriety to Janowicz’s text and it’s a credit to him that despite having to clearly communicate a great deal of historical detail in a short space of time (80 minutes) the piece contained no flat sections.

As Northern Fleet Commander Admiral Popov, Eugene Gilfedder gives a masterful performance. He’s an outstanding local talent and in my opinion it’s his assured performance that pushes The Kursk over the line.

The other members of the cast Edward Foy, Dirk Hoult, Sasha Janowicz and Amanda Mitchell move effortlessly between their multiple roles. As the grieving widow left behind to wait while the world holds its breath, Julianne Youngeberry brings an earthy sweetness.

The Kursk looks fantastic. It was never going to be easy to bring the story of a submarine disaster to the stage, but clever design (Michael Futcher) and an eerie soundscape (Luke Lickfold) lend the production a cinematic tension.

The Kursk is yet another triumph for Matrix Productions, the theatre company established by the multi-talented creative team of Michael Futcher and Helen Howard. It’s a triumph also for La Boite who must be commended for continuing to support quality local productions.

My only advice – read up on the story of The Kursk before you see the show. The more prepared you are, the more you’ll get out of this masterful re-telling.