How difficult is it to get overseas cabaret artists to travel to Australia?
We have been very fortunate this year, but pretty much everyone that we approached to be part of the Festival took us up on the offer. The reputation of the Festival has meant that we have not had a tough time at all in persuading them to make the journey. We have a large number of performers coming over – from New York, Los Angeles, Buenos Aires, Auckland, Paris and Montreal.

How much content in the Festival is made up of Australian acts?
Roughly about two thirds. We have a combination of the most well known names in Australian cabaret – for example, we have the wonderful Robyn Archer with her latest performance – a guide through French cabaret, as well as some of the newest faces. But in addition to this, we have a number of well-known faces who are taking on cabaret as a new medium through which to perform.

Tell us about some of the international guests you have invited to Adelaide this year.
Well, the headliner is Bernadette Peters. The day after my tenure was announced last year, my wife Lisa and I sat at home and opened a bottle of champagne. We looked at each other and said ‘Now what?’. Lisa suggested that I email Bernadette’s director, Richard Jay Alexander - a friend of mine from when I lived in the US. I did and put in an offer for Ms Peters to be our first headliner. Thankfully she said yes. I don’t think we could have wished for a better performer.

With regard to other internationals – we have Janet Klein – the ukulele chanteuse, who we discovered at Fuji Rock Festival; Duel – two classical musicians with incredible physical comedy skills; Butterscotch – an extraordinary African American pianist; and beatboxer, John Bucchino – the acclaimed songwriter and many more.

Are there any interactive performances in the Festival?
We have the ever popular Sing Your Own Musical with Michael Morley, a series of kids workshops with Mr Percival – the Sydney based vocalist and with regard to competitions – we have the finest game that I have played in years – BINGAY!  This is bingo hosted by the divine drag queen Mitzi Macintosh and her butch barrel girl Naomi. It is bingo like you have never played it before! All proceeds are going the Bobby Goldsmith Foundation.

You achieved great success in the New York cabaret scene very early in your career. What did you learn about cabaret there and about yourself as a performer?
I learnt that it is a far broader form of entertainment than I initially thought. It is not just singing show tunes, though that is certainly part of it. I realized that honesty in your performance is the most vital thing that you can have.

Artist who inspired you to perform
Bruce Springsteen

Crazy improvised moment on stage
My shows are practically all improvised

Memorable theatre practical joke
My wife was in An Inspector Calls at QPAC in 2006. There was a scene where a crowd came on. We thought it would be funny if I dressed up in drag and went on, as a bonus cast member. I still don’t think Frosty has forgiven me. 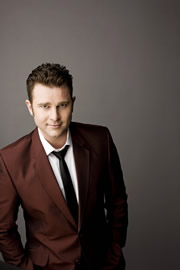 How would you describe the differences between cabaret in New York as compared to Australia?
I was in New York earlier this year and was shocked to see how many of the cabaret rooms had shut down. The Cabaret Convention which used to take place for a week at Town Hall, has been downsized to 3 days at the Lincoln Center. Cabaret was being marginalised as an artform. I saw that one of the few places in the world that was keeping cabaret alive was Adelaide.

What do you think are important elements that make a great cabaret show?
A true connection to the audience and to the material, otherwise you are just watching a concert.

Many Australian cabaret performers who wish to work solely in cabaret go overseas or perform in other music theatre genres here. Is cabaret a small pond in Australia – a genre that largely music theatre performers cross into when exploring personal works?

I think that it has been overrun by musical theatre performers, too keen to do their audition pieces to an audience of friends. We are encouraging artists to push the boundaries of cabaret. Australian audiences are not stupid, in fact they are some of the most discerning in the world, in my opinion. You will see from this year’s program that I have been actively approaching performers from all branches of the arts and music scenes to get them to explore the cabaret genre. We are fortunate enough to have Kate Ceberano, Ross Wilson, my father Jimmy Barnes, Tex Perkins, Hugh Sheridan from Packed to the Rafters and Mary and Melinda Schneider – all investigating the medium of cabaret.

How differently do you approach cabaret as compared to a concert on tour or a theatre role?
Not differently at all, really. I believe that the honesty and communication skills needed for cabaret should always be carried through in other branches of performance.

The works of which cabaret composers are you particularly drawn to?
John Bucchino. He is coming out this year to do two shows. One where he will explore his own songwriting and another where he will perform with some of Australia’s finest voices. Others include Andrew Lippa, Adam Guetel and the Aussie’s are no slouches either – Eddie Perfect, Matthew Robinson, Gary Young and Trevor Ashely.

Will you be performing at the Cabaret Festival this year?
Yes, I am doing The Dad and Dave Show with my father. We did a show for a night at the Spiegeltent last year in Sydney. It was a great experience, looking at each other’s songs and singing the songs that meant stuff to us both. It is an acoustic show – and perhaps the most intimate that I have ever seen my dad with an audience.

You have been so busy this year with the GOOD LOVIN’ CD and the national concert tour. Now you have the momentum of the Cabaret Festival building. What’s next for you beyond the festival in June?
I am going to take my wife on a honeymoon! We have not had a holiday in 3 years, so we are going to get away for some proper rest. But as soon as that is over, it is back to the grindstone for 2010!

John Swan
In only its second year, the Adelaide International Guitar Festival is already arguably the largest “single instrument” festival in the world and has rapidly found it’s place on the...