The Ruffian On The Stair | Le Poulet Terrible 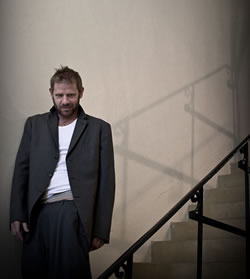 There seems to be a preoccupation within the theatre industry at current to produce works that are said to be modern, which push boundaries and reflect today’s society. Local Melbourne theatre company, Le Poulet Terrible, has gone against the trend with English writer Joe Orton’s work of the early 1960s, The Ruffian On The Stair. While in its day its underlying themes caused quite a stir, more than forty years on, particularly in Australia, its themes are neither particularly controversial nor relevant. But this is a play with some great dark humour and two outstanding lead performances, and under the direction of Alice Bishop, it turns the mundane into the intriguing.

The play opens with Mike (Michael F. Cahill), balding and rosy cheeked, sitting at the kitchen table. He is shaving his face and it is a precise and timely routine, one of his many it seems. After a while Joyce (Natalie Carr), plain and more dishevelled, rises from the bed to join him. While they were once lovers, Joyce now spends the majority of her time diligently fixing his tea and pressing his shirts. Mike leaves Joyce for many hours at irregular times, preferring to shine his shoes than offer Joyce any physical affection or substantial conversation.

It is easy to see why, in its day, this play caused controversy. Joyce and Mike have lived in an inner London community housing block for several years out of wedlock, there is mention of discrimination against Jews and ‘colours’, Mike is a Catholic and Joyce a protestant, not to mention the fact that Joyce used to be a prostitute. Then one day Wilson (Matthew Molony) arrives at the door. He seems to have been watching Joyce’s movements for some time and then sneakily weasels his way into Joyce and Mike’s life.  He is, it turns out, chasing the murderer of his brother but in doing so, he terrorises Joyce with the threat of sexual advances, hints at his own incestuous relationship with his brother, and threatens murder.

Both Cahill and Carr give performances stronger and more consistent than many that have been found on Melbourne stages this year. Cahill presents well as the impeccably groomed Mike, generally likeable but with a temper. To be picky, Carr is perhaps too pretty and slight for the role of anex-prostitute. It is hard to imagine her ever having the backbone to be a working girl – however classy. While Cahill’s Irish accent and Carr’s working-class English accent are very thick at times, they are a joy to listen to. Their moments of anger, fear, and frustration are wonderful and Carr’s teaming of these with subtle looks and mannerisms is quite remarkable. It is a treat for the audience to be so close to the performers to witness this.

Moloney is suitably greasy and dim as Wilson, however he is let down greatly by his inability to sustain an English accent, not just throughout the play but throughout his sentences. It is distracting but thankfully does not detract from Carr and Cahill’s brilliance.

Before being adapted for the stage, The Ruffian On the Stair was performed on BBC radio and its auditory origins are evident. Much of the crucial action is performed out of sight, but the cries of terror and what looms on the other side of the door are always felt. The performance space, two large rooms at the back of Footscray’s The Dancing Dog Café, lends itself brilliantly to the creation of threats from behind walls and on the other side of windows and doors. It is easy to feel Joyce’s fear of her intruder as the rapping on windows, rattling door handles and banging on wooden floors echoes through the building and shakes the furniture.

Sian Blohm has designed her set around the walls and windows, creating two distinct spaces. At the front is the brightly lit kitchen with just a table and chairs. The rest of the kitchen is painted in black outline on floor to ceiling pieces of paper clipped to the walls. It is an interesting choice considering the otherwise naturalistic set and yet it suits the destitute apartment and after a while becomes just another part of the decor. Isobel Ferns’ lighting makes the most of the natural shadows that form within the building, in particular, the strategic placement of a lamp in the back bedroom, creating a mood that is a mixture of dinginess and comfort.

The official programme for this production lists its themes as “grief, revenge, incest and homosexuality” but the frustrating, and curious, thing about this play is that most of these are only alluded to. Undoubtedly audiences have become accustomed to the brutality and crudeness of today’s world and its explicit portrayal in the arts but Orton’s play is so unusual because it gives a slow reveal without ever really revealing anything. So much is hinted at, and even then it is possible that this is because of preconceived notions. Why does Mike meet with men in such a seedy place as the Kings Cross toilets? If Mike’s connection to Wilson and Wilson’s brother is as it seems come the final deaths in this play, why is Mike so welcoming to a man who has put so much fear into Joyce? And perhaps above all, why does Mike react with such affection when presented with the photo of Wilson’s brother? Theories can and will be drawn, no doubt. Bring it on. After all, who needs shock value when you have old-fashioned mystery and intrigue?