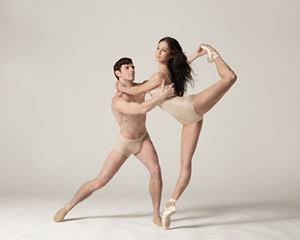 As do the two ballets that follow, it does not ask the audience to come on a journey but rather pulls them with magnetic force – across the orchestra pit, onto the stage and deep within their own imaginations. These works are the most modern of the Australian Ballet’s season and only Matjash Mrozewski’s visit to the Greek myth of Semele in his ballet of the same name, resembles a classical narrative. Nevertheless, Interplay guides its audience so that by the time the third and perhaps most abstract ballet is unleashed, that being Nicolo Fonte’s Possibility Space, the audience has relinquished itself to the blend of music and dance.

Piercing the mist of night are two giant silver tree branches. Below them are movements of green, floating to the music. These signs of life are in fact dancers and they transport the sleeping girl, Principal Artist Madeleine Eastoe, through the night. Night Path is a journey to discover what our subconscious can conjure up or rather, where we can be taken by our dreams.

Baynes has placed his dancers somewhere within the seemingly timeless nature of sleep, in a vast landscape, far from the comfort of structure. But Richard Mills’ evocative score, Symphony of the Nocturnes, successfully moves the dancers from the dead of night, to the cheeky pleasures that come with the anonymity of darkness, to a glimpse of sunrise, and finally back to sleep.

The ballet, along with Michael Pearce’s set, is all about delicate and breathless movement. Aside from the branches there are only cloths, shimmering and reaching to the heavens. A gaping silver cloth is the light of the moon and a bright orange cloth, the threat of sun. They are lifted and shifted with great precision to create a backdrop or spaces for the dancers to move behind, in front of, and within. The costumes work in tandem with Jon Buswell’s lighting to create a tranquil silvery-blue haze.

Eastoe’s feet rarely touch the ground as her fellow dancers manipulate and move her across the stage in a series of seamless lifts. She portrays a delightful sleeping beauty and her moving in and out of consciousness is most elegantly marked as she falls to the ground and then with an arch of her back, slowly rises to be taken off once more. Only when the objects of her dreams dance off into the night for the final time do the audience take a breath.

Leaving the cool of night, the audience is then taken to the depths of fire with Semele. In this Greek myth, mortals cannot look at the gods without dying. The god, Jupiter, is married to Juno, performed by Principal Artists Robert Curran and Olivia Bell. Their forms are pronounced but in many instances their individual movements require minimal body contact or support from the other. It is a chance for Bell to display her own brilliance but also shows that Jupiter and Juno’s relationship, while powerful, is loveless. It is Semele, a mortal, performed by Juliet Burnett, with whom Jupiter falls in love. Burnett’s tiny stature suits her rather helpless and innocent character and as the two perform their many sensual floor-based moves and intricate lifts, they reveal themselves as a more pleasing physical match than that of Curran and Bell.

Under the persuasion of a jealous Juno, Semele asks Jupiter to show him as his true self and it is then that a red satin cloth, once a burning sun in Adam Gardnir’s striking set, lowers to the ground. The cloth becomes the grand cape of Jupiter the god and Curran and Burnett’s transferring of the cloth between each other in a most intricate display of unity. On Jupiter the cloth is a cape of power but with help from Semele the cape finds a life of its own. Semele has fuelled the fire and consequently plays a considerable part in her own demise.

Gerard Brophy’s Semele doesn’t arouse the senses quite as much as Night Path. Perhaps because there is less room for the imagination to find its own meaning within the work.

In Possibility Space, the dancers are for the first time confined but the work itself is intense. Markus Pysall’s constructed space surrounds the dancers with metallic, reflective walls, and this works with Brad Fields’ fluorescent lighting to create a rather sterile, laboratory-like environment.

Fonte’s choreography reflects the dancers’ potentially restrictive surrounds and the less than smooth process of creation. The pointe shoes have been dispensed with and the positioning of feet and movements take on a much more awkward form, though no less technically sound, than seen previously. The deliberate style and frequent placement of dancers in close proximity to one another does unfortunately accentuate the few disparities in timing between the dancers. The strength of the Principal Artists Adam Bull, Danielle Row and Damien Welch is best appreciated as the music slows and the group split.

There is a sense of urgency in this work, yet Ross Edwards’ score is anything but harsh and despite their clinical form, the dancers, dressed in plain electric blue, and their movements, reveal soul. There is a curious contrast between these alluring dancers and their environment, a glimpse perhaps into the creations and constructs that come from collaboration and the most unlikely of places.

There is great beauty in simplicity. Interplay is a fine example of artists stripping their work of all the frills and together creating something out of this world.