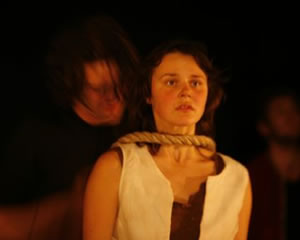 Our Country’s Good, written by Timberlake Wertenbaker, based on the novel, The Playmaker, by Thomas Kenneally is about the beginnings of colonization and the foundation of Australia, set in Sydney in 1789.

The three hour event currently being performed at Theatreworks is clearly the culmination of thousands of hours of work - the creation of the novel, the adaptation of the play, the first performance at the Royal Court Theatre in London and then, of course, the journey Glenda Linscott (the director) has taken since hearing Thomas Kenneally passionately discuss the themes of the play on radio in 2006 right through to auditioning, casting, directing, designing and rehearsing ten talented young actors in the current Melbourne production.

In commenting on or critiquing the piece as a whole, where does one start?

Without having read the novel or taken the time to research the time period, I feel underprepared to review such a piece, but for what my thoughts are worth, generally, I confess I teetered between being confused and bored, to being curious, interested, involved and intrigued how the story would evolve. There were moments I tuned out, but moments I was gripped by the action on stage, the emotion being portrayed and story unfolding. There were moments I ‘saw the acting’, followed by moments so credible I forgot I was in a theatre.

The ensemble cast of Mick Lo Monaco, Michael Wahr, Grant Foulkes, Terry Yeboah, Brett Christian, Marissa Bennett, Celeste Markwell, Katya Shevtsov, Brendan McCallum and Susan Miller were committed and technically strong, but there were times when the connection with the audience was lost. Maybe this was to do with the play’s content, with my personal connection to the content or with the length of the piece and time required to concentrate on the action, but it distracted me from the effort and skill evident throughout.

The director found relevance in the play to two modern issues recently in the media – the Beaconsfield mining disaster and the ‘unimaginable child sexual abuse and domestic violence, which is apparently endemic amongst our remote Aboriginal brothers and sisters’. I wanted to see a similar relevance and be moved, but for the bulk of the piece, I couldn’t see past a play set in 1789 being performed by actors on a stage about a time gone by.

The director, cast and crew should be admired for their skill, effort and interest to bring Australian audiences such a slice of Australian historic life, but it felt like a history lesson which might struggle to attract a class of interested students.