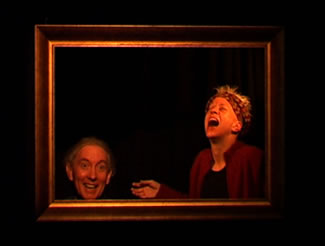 You have only a couple of days left to catch the first production directly commissioned by the Sydney Theatre Company’s new artistic directors, Cate Blanchett and Andrew Upton (aka Glitter and Fluffy – lol).

Most of us know Robyn Nevin commissioned the main-stage season for 2008, which looks promising. And, while settling in to the multitude of challenges of running a big company, Upton and Blanchett were given responsibility for the smaller-scale parallel program known as Wharf 2Loud, as it has been now for several years.

Their opening selection - embrace: GUILT FRAME - is really quite fabulous and bodes well for the direction of future programing. The work comes from an entirely different set of commissioning criteria than that which saw Wharf 2Loud, in the past, focusing mostly and successfully, on evolving new writing skills.

For starters embrace: GUILT FRAME has no words. And I would recommend not going to the words in the program either before you see the show, as you might be intimidated or put off. This short 40-minute work involves no more (or less) than the heads of two actors slowly shifting through the expression of a range of emotions within a neat gold picture frame hanging on a plain black wall.

The pair move with hypnotic slowless and careful deliberation through a range of inner states that manifest themselves on the surface of the body – mostly their faces, but upper bodies and arms and hands sometimes enter the frame. The pair appear to work both separately and together through the 40-minute journey which is as mesmerizing as it is inexplicably profound.

The meaning of the work lies at a primal level which virtually defies the kind of commentary deployed in conventional ‘criticism’. This leaves a reviewer somewhat – and rather marvelously – exposed. All I can say is that the work is elegant, simple, complex, profound, stark, elusive – yet never daunting. It is wonderfully easy to watch and very effecting.

Dig into the program and you will find how complex the origins of the work are. Not only is there De Quincey’s reputation as one of the most senior and significant Australian performance artists working outside the so-called ‘mainstream’. But that this piece belongs to a series of explorations set in a wide variety of locations involving two universities (Monash and Calcutta) and theatre artists from both Australia and India. Through De Quincey’s past work, there is a definite element of Japanese – ancient and contemporary – theatre tradition as well.

By the way, this is a project that is taking up, not months, but years. With performances taking place in locations as varied as an Indian stately home, among Calcutta’s homeless children, a giant meal of dahl for an audience at the Performance Space in Sydney, and a dusk event at a fishing cove in southern NSW. There are more and larger-scale works to come.

At the heart of the project lies the Natyasastra, an ancient Indian treatise on artistic practice that, at its core, involves what are understood to be eight (only) core emotional states. It’s a work I did not know existed. embrace: GUILT FRAME sets out to explore these states, literally within an approximately 2x1 metre ‘gilt frame’. And wow, is it a roller-coaster journey.

Not only is the work an utter treat to the senses, it serves as the first opportunity for Glitter and Fluffy to show their creative hand, unencumbered by the authority of others. If this is meant to serve as an opening statement – an entrée – then we should be getting excited. It is an extremely bold, sensual and innovative choice.

The curatorial decision is more than one of ‘inclusiveness’, in allowing one of Australia’s most gifted ‘alternative’ theatre practitioners into the main house. The benefits work both ways. Those of us who rarely make time in our diaries to visit this kind of work, here have it thrust upon us – or more accurately, made available to us through channels with which we are more familiar.

Not to be overlooked is the work of co-performer, and indeed co-creator, Peter Snow. The thought of a theatre-arts academic being let lose on any stage rightly fills with trepidation anyone who have encountered such efforts in the past. The results, however intensely researched and well-intentioned, are almost always ghastly. Not so this time. Snow’s performance is massive: articulate and profoundly emotional, as it reaches high states of delight, anger, sorrow and more. Snow, currently Associate Professor and Head, School of English, Communications & Performance Studies has contributed significantly, not only to this particular work, but the larger project that is bringing together theatre artists and researchers from two major continents for what appears to be wonderful journey of shared discovery.