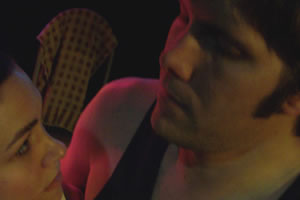 There were a few good reasons to go and see Dirty Pretty Nails. First, the venue. From previous visits, I knew the Blue Room was the right place to see a play written, directed and acted by a younger crowd, away from mainstream Theatre. Second, the press release described a plot that seduced me straight away: "Dirty pretty nails is a shocking, gritty and beautiful story of one girl¹s obsession to dig up the past and make the present pay for it. Bones will be uncovered, words unguarded and sexual perversions ignited". "Cool!", I thought. But I was wrong.

After ten minutes, I realized I was trapped in a small room at times full of unlikely characters and their sometimes inaudible speeches and, at others, shouted outbursts of rage, all buried under an unbearable storyline. Initially I thought I was at fault, but half an hour into the production, a woman in the front row stood up and left the theatre. I felt like following her, but then decided I should stay to find out what had gone wrong with a potentially winning combination.

At the very end - which I thought was an interval because neither of the actors came back on stage to take the expected bow, and the director disappeared through a back door - I realized it was not the text that was the problem. Although I couldn't say for sure that Andy Harmsen did a great job as a writer, it was clear that even if he had written a good text, his directorship, at least in this production, ruined the final result.

The concept of Dirty Pretty Nails is good. Harmsen brings together two potentially interesting characters in Evelyn and Adam. Evelyn is a very young girl haunted by the death of her dog, trapped as the carer of her terminally-ill grandfather, who seeks to escape her reality by dreaming of becoming a nurse like her estranged mother. Adam is a middle-aged, disabled man, trapped in a small house with only his crutches and a load of insanity for company. After reading the program, I realized that this otherwise promising playwright had created his characters as two people who are trying to "soak their pasts in kerosene and leave it, smouldering, behind them". But when transported to stage, Evelyn and Adam do anything but try to forget the past, on the contrary, the past becomes their obsession, so much so that the characters completely lose any depth.

Maybe because of this conflict - an idealization of characters that is not followed through on stage - the actors seem uncertain of what to do with their characters. Kelly Paterniti is completely lost on stage, seemingly concentrated on the body-language clichés that are supposed to make her look infantile. It feels like the actress doesn't believe that a character like Evelyn could be real. Daniel Gillett does a better job, but he has it too easy, as his role is to act the well-known, female-bashing-who-has-something-to-hide, false macho, screaming violently at a fragile and obedient 'little girl'. He is quite convincing in the role of a man capable of balancing solely on his crutches. But this accomplishment is somewhat exaggerated and the audience becomes, after a while, bothered with a metalic stomping noise that is sometimes louder then the voices we should hear. It would have been a better choice, a director's choice, if Adam had been given a bed to spend for some of his time on stage. Gillet's character would then have be more believable and we would have been able to hear the text more clearly.

Unfortunately, Dirty Pretty Nails is not the shocking, gritty and beautiful story that the production notes had in mind. There's no shock when Adam appears naked in a bathtub, placed in the middle of the stage. No grit with his constantly screaming insults around, and when Evelyn attacks Adam with a luscious kiss in the final act, like the play itself, it is anything but beautiful.