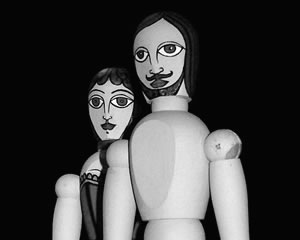 Before reviewing this play, I feel I must disclose I have a secret fondness for being read to.  That delicious feeling of sitting quietly and receiving words from a rich and expressive voice, who talks me into another reality; why it just makes my toes curl up. If you too share this fondness with me then you should really know that Humphrey Bower has such a voice and that The Kreutzer Sonata is such an experience.

Based on a story by Tolstoy, The Kreutzer Sonata tells an account of a man traveling on a train who is, in turn, told an account of a man who is renowned for killing his wife, as told by that man. The story telling is facilitated by the use of small dolls to introduce further characters.

Presented by LaMama, this Night Train Production is adapted and performed by Humphrey Bower with music and dolls by Jess Ipkendanz; the performance includes a live musical accompaniment from Ipkendanz. The production’s focus is skillfully shared by performer and musician, with neither over or underwhelming the other. The attention to detail in this production is also impressive, utilising simple set and lighting (Gwendolyna Holmberg-Gilchrist) effects in a manner that reassures the audience of a professional production, a quality too often lacking in some other shows. There is therefore a sense of completeness in the atmosphere created here. Bower and Ipkendanz are striking performers, who are focused and generally compelling.  On the negative side, the use of dolls, though it by and large works, it is occasionally too like a playschool experience, and I was also a little jarred when the traveling man did not reappear at the end as he was the one guiding us through the story.

The Kreutzer Sonata is a mysterious, atmospheric and mature production. It credits the audience with intelligence by leaving the intentions of the characters open for dispute and it showcases two very gifted performers. It also deliciously reinvigorates the venerable story telling tradition.