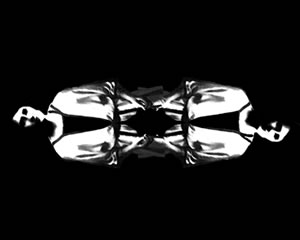 I was extremely excited to walk in the doors of the Woodhouse theatre on Friday night, to see Plague Theatre’s production of Jean Genet’s The Maids. I had read that this play was banned in America in the 1950s and that it centered around the double murder committed by two French sisters in 1933. And what excited me about this, was that the play itself was a part of history. It is taboo, it is controversial and yet I was certain that it would be timid in comparison to today’s films, such as American Psycho or Wolf Creek.

Visually it was timid by today’s standards, however this does not mean that it was anything short of disturbing. What I found most exhilarating about this production was the ability for it to emotionally affect. This play has the power to cleverly unearth the psyche of a murderer. And even though the reasons for the sisters choices were greatly affected by their times, it doesn’t mean that our society is short of the same danger.

Director, Cathy Sheargold, is to be proud of this production. She seemed to control the dialogue with all its colour and shade, to the point of splendid manipulation. There were a number of times that I thought I had this play pegged only to be shifted again to a whole other realm. There was a beautiful and poetic simplicity about the production. The sets, props and costumes were essentially sparse, but also meticulously thoughtful and selected with apparent purpose. This seemed to enrich the play all the more. There were times when the exchange of power between the sisters was a little too apparent, and thus there were moments when the tension was not developed as well as it could have been. Essentially, Sheargold seemed to own the text, and as an audience member it felt as if she was not only showing us something seemingly insignificant and forgetful, but presenting us with a story that although sad, demanded great respect.

Both Belinda Small and Katherine Hunt are to be commended on their performances. These characters are clearly difficult and ambitious roles to tackle. As an audience member it was easy to be exhausted and confused by their complex and depressed state, let alone having to embody them. There were times when I felt as if their performances were a little too dramatic, and not because the script didn’t call for that energy, but because it began to feel like primadonna acting rather than genuine emotion and pain. I would have liked to see a subtler performance. However, this could be put down to the direction. Furthermore, on the introduction of the Madame, their performances made all the more sense. Vanja Matula was delightful as the Madame, and drew me even further into the production with his subtle performance. It was not only amusing, but worked in perfect contrast with the leading ladies. It is here that it became apparent that this ensemble was fantastic.

The Maids was a highly ambitious play for Plague Theatre to take on board. However, they were very wise in utilizing their resources to create a very significant and admirable piece of theatre. There is something truly innovative about what they did the other night, no matter how old the play. I have never seen anything quite like this on the Brisbane theatre scene and therefore whether I like it or not I wait in anticipation to see what they next attempt.