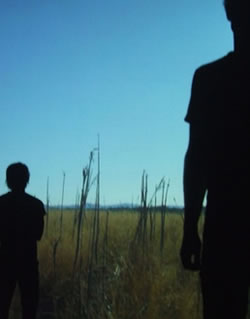 In October of 1998 21 year old openly gay student Matthew Shepard was robbed, beaten and left for dead, tied to a fencepost in the middle of nowhere. Based on Tectonic Theatre Project’s interviews with over 200 residents of Laramie Wyoming, The Laramie Project examines how one small town came to represent the darkest aspects of the American Dream.

Tautly directed by Lucas Stibbard, The Laramie Project unfolds in docudrama style, with eight actors playing various parts. It takes us to place that is “like no place on Earth”, a sleepy town that’s a great place to live – just so long as you’re not gay. On the surface it’s a paradise of open space and open minds where you can walk down the main street and everyone knows your name.

But the deceptively simple text reveals another darker side. As the residents cope with their own long-held prejudice in the wake of Matthew Shepard’s death, we are drawn into a community that is in reality an ecumenical battleground where being gay is worse than being a murderer.

The production looks and feels spare, the actors appearing like figures in a barren landscape. There are no bells and whistles, the stage is a jumble of sad cardboard boxes and the actors, playing multiple parts make brief costume changes on stage.

Though minimal, the sound design is powerful and somehow frightening. It evoked for me the total loneliness of the place where Matthew Shepard was left to die, a bull fence separating nothingness from more nothingness.

The cast are, without exception, outstanding. Embracing the earnest intent of the production and going beyond the stereotype, making flesh the dark side of the American Dream.

The courtroom scenes are very moving. Stibbard’s handling of these scenes, particularly the statement from Shepard’s father in which he begs for clemency for his son’s killers, is wise, restrained and unsentimental.

Stibbard has also wisely discouraged his talented cast from attempting the Wyoming twang. As he says it would have detracted from what was being said if the audience had also to concentrate on mastery, or lack there of, the accent.

It also brings home to the audience that this kind of tragic hate crime could be played out anywhere in the world. And there is a certain eerie resonance between the wide open spaces of Wyoming and the Australian outback.