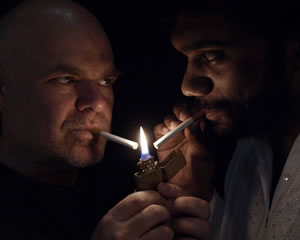 You’re walking home around midnight. It’s cold and dark and the streets are deserted. You’re in a foreign country so your senses are on high alert. Suddenly, from nowhere, a stranger lurches from the shadows. “Got a light?”

This is the situation that young Pakistani student Ahmed (Craig Meneaud) finds himself in when confronted by the unpredictable and ambiguous ‘great white’ Norm (Laurence Coy) in this revival of Alex Buzo’s sharp, satirical, 1960’s classic, Norm and Ahmed.

What ensues is a tense two-hander, which wrestles with the disturbingly relevant issues of racism, xenophobia, cultural difference and assimilation in a country that has sadly changed little, in almost forty years since the play’s premiere.

Norm, a Vietnam Vet, is seemingly eager to bestow the virtues of Australia’s culture of booze, R.S.Ls and rugby league on Ahmed; but his belligerent attitudes make the whole exchange seem more like a test - of a ludicrous citizenship variety - which can only result in exposing Ahmed’s lack of so called Australian values.

Ahmed is attentive and receptive to Norm, but he’s better educated and has his own ideas. He’s keen to get his degree and head home to Pakistan to shake up the status quo there. Norm is convinced that’s a bad idea and seeks to persuade Ahmed to stay and talk longer, to what end we’re not sure, until the plays reaches it’s abrupt and unsettling climax.

It’s a shrewd move to revive this play now, particularly as we near another election where the insecurities of the nation continue to be manipulated by the political machine. It’s appropriate too that in this update Ahmed is clearly Muslim. There are subtle new connections to be made calling to mind Cronulla and the fear of terrorism in our own backyard; Ahmed carries a backpack - is he really a student or could he be a terrorist?

While a play that enters such difficult territory could easily become bogged down by the weight of its issues, Buzo’s love of the Australian vernacular and Neeme’s deft direction keep the play crisp and entertaining. There’s plenty of laughs to be had - mostly at Norm’s expense.

Lawrence Coy’s Norm is a tour de force – edgy, erratic and dangerous. He’s a ticking time bomb ready to explode at the slightest provocation. He embodies the stereotypical Australian paradox: warm and welcoming one minute, then hostile and dismissive the next.

Ahmed (Craig Meneaud) is the cautious outsider, reluctant to accept Norm’s friendly advances for fear of the aggressive undercurrent that lies beneath. When he discovers that Norm’s pretense for their discussion (the request for a lighter) is a ruse, Meneaud’s reaction is perfectly pitched. He’s in trouble now, or at least he could be, but we’re sure that his brains are an equal match for Norm’s brawn.

Deirdre Burges’ set design is apt, suggesting an Australia still under construction. While Youlden’s lighting, hard and cold serves to remind us that the world is watching, whether we invite them to or not.

This is the second outing for the Alex Buzo Company, following it’s September launch. Founded by Buzo’s daughter Emma, it seeks to produce, promote and perpetuate the work of the late Australian playwright. It is a venture which should be applauded, as Buzo was one of the greats. With any luck, his plays will continue to attract new audiences and perhaps even start a trend for other Australian playwrights to be honoured in a similar way.

Catch Norm and Ahmed at The Old Fitz from Oct 9 – Nov 2. As a special treat all Sunday performances will be followed by a rehearsed read of it’s 1998 sequel Normie and Tuan.