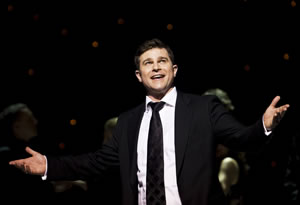 With legendary composer Stephen Sondheim in the audience, the excitement and anticipation on the opening night of Kookaburra's Company at the Theatre Royal was palpable.

When Company opened on Broadway in 1970, it was the first play written with a non-linear plot. The story all takes place inside the hero Robert's head. A nervous breakdown of a man on his thirty-fifth birthday. The play unfolds as a series of recollections, almost in the form of flashback scenes. The presentation in unnatural time and insequential scenes helped revolutionise and break the boundaries of a story telling narrative.

Director Gale Edwards has produced a fascinating and compelling work with clear themes and filled with irresistible humour. She uses larger than life characters, reflecting Robert's polarised view of the problems and insecurities of each couple, which both intrigues and at times repels him. Edwards makes sure Robert is not on the outside looking in, but in the centre of the action trying to discover his place and survive. It is obvious all the women in the cast are in love with Robert. And all his married male friends are torn between an envy for Robert's freedom and their desire to set him up with a wife to have the true happiness they feel.

Leading man David Campbell is perfectly cast as the charismatic and complex Robert. He is constantly embarrassed by his friends and confronted about his fear of commitment, though the moments of awkwardness are real and never overplayed. Campbell brings a genuine warmth to the character and his rich voice soars above the difficult and dramatic vocal challenge. In the finale Being Alive, Robert's heartaching loneliness rips your heart out. A bravura performance.

The ensemble of Company is filled with many of the best leading players in the Australian music theatre community. Each member works towards building a cohesively strong chorus, while individually adding such well defined and distinctive array of characters. All worthy of strong praise, though some are more featured in this piece.

Simon Burke is excellent, showing his versatility with a gruff and aggressive Harry, battling a competitively headstrong but loving wife (also a great turn by Katrina Retallick). Then he is able to drift seamlessly into the touching and beautifully sung Sorry-Grateful, ably joined by Rodney Dobson and William Zappa.

Tamsin Carroll plays free spirited Marta with a great sense of fun. Her phenomenal voice lifts the roof with Another Hundred People, as she stands watching and commenting on the New York throng rushing by.

Chelsea Plumley attacks her wedding scene as the near psychotic Amy with hilariously frenetic energy. During Getting Married Today, she manically rushes around the stage and doesn't miss a beat while singing one of the most challenging and funniest patter songs of music theatre history while hapless and charming Paul (Scott Irwin) stands by lovingly.

Anne Looby is exquisite, making the most of her witty and barbed comments. As the statuesque Joanne, her driven character challenges Robert more than his other friends to own up to his true feelings. And her own emotional journey in The Ladies Who Lunch is powerfully moving.

Costumes by Julie Lynch help to place the players in a very attractive, slick and classy New York set. Adding to this are some wonderful offbeat looking potential girlfriends that stand apart from the crowd.

The set design by Brian Thomson wraps the show and the stage up in a red ribbon complete with a birthday gift bow. The New York skyline is presented colourfully in the light of day and also as an illuminated silhouette in the evening.

Lighting designer Damien Cooper gives the production an episodic feel with dreamlike sequences. And the sound design of Michael Waters balances the actors well with the orchestra and the high quality of singing onstage is given wonderful support and appealing balance.

John Connell's choreography compliments the direction in creating almost surreal settings.
Robert is often buried beneath his friends or being dragged or thrown around by them. And Getting Married Today is a comical triumph, even suggesting marriage could be a sort of emotional suicide, surrendering one's identity.

Such is the brilliant writing of Company that the ideas will stay with you afterwards and it will make you consider your relationships with those around you. Especially if you are single!

Kookaburra's Company is a must-see event on this years theatrical calendar. With any luck this production will get to tour the country.