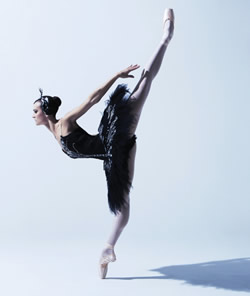 The Paquita program is a mixed bill of pas de deux (duet) bookended by two ensemble works. The format has often been described as a chocolate box sampler of various classical pieces. This is apt, as audiences will most likely find something that suits their taste buds, whether it is the hard and nutty Black Swan pas de deux or the gooier Le Corsaire, with its fluid pinks and oriental hints.

In a program like this, with no narratives or full length stories to distract from the dancing, technique is crucial. In fact, one of the main reasons for the pas de deux within ballet is to show the individual technique of both the male and female dancers as well as their skills dancing together in a connected duet.

Each individual dance presents physical strengths and musical interpretations above all else. It’s a big ask for the dancers since the works are so physically demanding, filled with long turning sequences and complicated jump patterns.

In Saturday night’s performance, there was variation among the works, with some looking sharp as a tack and others seeming slightly off the mark.

Valetta a brand new work by company member Paul Knobloch, with music by Max Bruch, opened the program in MGM musical style, with a human tower of boys supporting a lone ballerina (Amber Scott) balanced precariously on a single hand. Its circles of fanning arms and legs have a mechanical look, like a clock face. Fast scissoring arms and legs are callisthenic in their precision and there is plenty of swirling, leaping and jumping around the female figure, framing her idealistic beauty.

Valetta’s aesthetic is clean – black, white and sequins with sparkly chandeliers hanging from above. The male ensemble ably danced and supported each other, with Scott a perfect embodiment of the cool, calm and collected ballerina, who is utterly feminine but still tough enough to keep up with the men.

Le Corsaire (choreography after Marius Petipa, music by Adolphe Adam and Riccardo Drigo) was danced by Kirsty Martin and Nobuo Fujino, who, in solos, executed their roles wonderfully - Martin, a paradigm of the sensuous woman, light on her feet and fluid in the body and Fujino, a powerful dynamo – his jumps and turns were fluid and spot on. (Though his severe facial expressions belied his supple body). Together unfortunately, there was little connection. Even though they were dueting, Martin and Fujino seemed to be doing their own dances, with little of the elicit passion that the union is meant to evoke.

Similarly, Lisa Bolte and Adam Thurlow in the Black Swan Pas De Deux from Swan Lake (Choreography by Anne Woolliams after Petipa; music by Piotr Tchaikovsky), had the restraint and control required for the work, but as a pairing, they felt ill-matched, like they were going through the motions, but not moving together.

Camilla Vergotis and Tristan Message had much better connection in Spring Waters (Choreography by Asaf Messerer; music by Serge Rachmaninov). It’s a short sharp piece with some whiz bang lifts and buoyancy to its steps that ensure never a dull moment in its 3 minute duration. There are plenty of surprises and precarious catches, which, if a millisecond off time, would have had disastrous results.

But the highlight of the night, and what epitomized the true spirit of male/female connection in pas de deux was La Favorita (choreography by Petal Miller Ashmole; music by Gaetano Donizetti) danced impeccably by Reiko Hombo and Tzu-Chao Chou. The duo was breathing the same air, dancing the same steps. It was precise and solid, with lots of split leaps that hovered in the air (as they should) and a true sense of joyful working together. The youthful zest was palpable and it had all the technical attack and precision required for stand out partnering work.

After that, the Greek themed Diana and Acteon (choreography by Agrippina Vaganova; music by Cesare Pugni), although danced by two of the companies most beloved and skilled principal dancers, Lucinda Dunn and Robert Curran, just didn’t pack the same punch. Dunn was her striking and alluring self. Curran, although he wore his baby blue toga very well, did not have his usual power (it was his fourth performance of the weekend!!)

Paquita, the evenings centerpiece finished the night with the Grand Pas from the ballet. It’s an ensemble piece with special solos intermixed. Individual performances stood out, especially Olivia Bell, Lana Jones and Scott, but the corps work, which needs utter precision, down to the last cascading finger, was just subtly off, taking away from the overall illusion of perfection.

Paquita is an entertaining program and one which audiences will love. Being more a fan of contemporary than classical works, I enjoyed it much more than I expected. It has an uplifting spirit and a reverence for the classical form. With all its various tutus, sequins and men in tights, Paquita is very much a sampling of all that is sexy and exciting about the world of traditional ballet. More than that, it is a grueling technical program and one that requires individuals to show off their skills with little room for error. Saturday night’s performance had a little of everything – from the ordinary to the sublime.