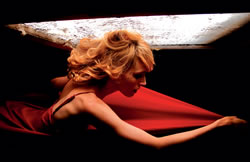 The publicists for Adam Rapp’s Red Light Winter have staked out their territory by advertising their play as being “in the tradition of Patrick Marber’s Closer”. While comparison to that late-90’s hit might be a selling point for some, it was a positive disincentive for me. Although not one bit as repulsive as that fetid abyss of GenX psychological masochism, Red Light Winter is at least thematically similar in that it deals with the seriously dysfunctional romances of a small group of thirtysomethings, with an emphasis on sex and emotional inadequacy. Although some have lauded this play as “hilariously funny”, it certainly is not a comedy. A dark character drama with moments of humour would be a more apt description.

Like Marber’s play, it is also very much driven by dialogue and features little action, taking place entirely in two long realtime scenes set one year apart (with the possible exception of a brief timelapse when one character sleeps). However, this is by no means a negative, as the dialogue is very strong and the play has a pleasing confidence in its use of narrative decompression. Especially praiseworthy is its willingness to have an extended sequence entirely lacking in dialogue at the conclusion of Act One. This use of silence is risky but it paid off, and I applaud Rapp for not using the witty dialogue which dominates the rest of the play as a crutch.

Red Light Winter is a concentrated three-hander, concerning an American odd couple of two somewhat belligerent longtime friends Matt (Tamblyn Lord) and Davis (Steve Mouzakis) holidaying in Amsterdam, and a painful “unrequited love triangle” that develops with the introduction of the Frenchwoman Christina (Melanie Mirto), a window-prostitute. It would be unwise to give away too much more of the plot, because frankly a play like this relies significantly on a character-driven story and its (notionally) shocking developments. Although compelling, the play is not adequately rich in general content to sustain strong interest without one’s desire to find out what happens next. As a result, while watching the drama was generally a satisfying experience, it wouldn’t seem likely to sustain one’s attention in repeat viewings.

One point of particular credit I must extend to Rapp is that he has created a play in which the central character is a playwright without the drama descending into a mire of blatantly self-referential excess. Although the trope of having authors as characters is an extremely tired one, even if not necessarily directly autobiographical, Rapp has managed to make his Matt seem fresh and believable. Perhaps this is simply due to having a truly pathetic character so well performed as to still come across as somehow likeable, but the juxtaposition with the less intellectual yet still highly-literate Davis and their arguments about favourite authors makes the literary motif of the play seem less contrived.

The three actors are all excellent, each delivering compelling performances with considerable layers of subtlety. The various accents used are all very believable, as is their ease with the naturalism of the dialogue. Each is as good as the other, although Lord’s insecure and increasingly pathetic playwright emerges as marginally the most prominent character due to his endless fountain of nervous ramblings. By way of a strong contrast, Mouzakis’ “ugly American” role is both endearing and repellent, a drug and sex tourist-come-publisher filled with self-loathing just beneath the surface of his overgrown frat-boy insults. The equally talented Mirto certainly has the most versatile role and perhaps the most challenging one, but it is difficult to say more without spoiling narrative twists. She does well with a character whose motivations are somewhat inscrutable, managing to evoke considerable empathy for a character to whom, in theory, many may well find hard to relate.

Ross Ganf has directed this production with a good eye to detail. The action and blocking in the one-room scenes never feel flashy or unmotivated, and have been well-matched to the deliberate pace of the script. Corey Thomas’ set design and construction (presumably with the collaboration of visual artist Rosie Ganf) is also very effective, turning the magic but notoriously difficult-to-design-for SBW Stables stage into essentially realist sets, with one touch of whimsy. Reflecting the literary obsessions of the male protagonists, the walls in each act are formed by overlapping “tiles” of open books, the pages for the first act and the covers for Act Two. A nice, unobtrusive touch.

Red Light Winter is a show that may not appeal to everyone. Some may find it dragging, self-indulgent, confronting, even downright offensive, or all of the above. Others may find it a revelation. While it is unlikely to be to everyone’s taste (especially the prudish), there can be no doubt that it is a quality play nevertheless.

For those interested in seeing an emotionally challenging “slow-burn” play, this comes recommended.