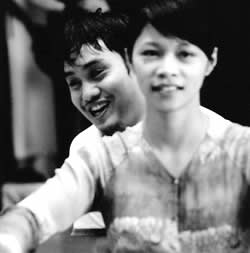 Shrimp is more than merely a play. It is an experience: both an aural and visual journey, a travelogue, an autobiography of a life so far, an insight into the mind of a trans-racial adoptee and a tale told vividly with every part of his body.

Commissioned by Melbourne Workers Theatre, Vietnamese-Australian Dominic Hong Duc Golding is the writer and principle performer of Shrimp. In fact he is ‘Shrimp’, by virtue of the term’s colloquial meaning – a little fella –  as he somewhat reluctantly explained during the question and answer forum aimed at VCE students held after the show. An exploration of self, culture, history and identity, Golding’s self-described “poetic prose/playwriting” takes the audience on a journey from Australia, where Golding was raised, to Vietnam, where he was born and returned to in search of his past.

Golding tells us he is many things: he is a UFO, of Unidentified Family Origin; he is Australian; he is deaf; he is a “banana”, yellow on the outside and white in the middle. And, without using words, he tells us so much more: he is fiercely passionate about life, he is honest, loving and curious about the world and other people, he is an uncoordinated dancer, a tuneless singer, and he is utterly mesmerising. Communication does not come easily to the protagonist. Shaping his mouth forcefully around speech, Golding’s tale erupts and lurches from him, his body tense, each phrase an effort to create. The effect is exhausting and wonderful to watch. Every word is truth.

While words primarily drive Golding’s story, director Peta Hanrahan has artfully moulded them around other theatrical elements. Bold lighting and shadow play are employed, occasionally guiding the audience’s collective eye away from the physical presence of the actors and instead to images more dreamlike, providing visual access to Golding’s memories. Minimal props and an abstract black trapezoid set allow the actors to create the world around them as they go. Most importantly Hanrahan has gathered together a talented pool of theatre practitioners in the creation of this production of Shrimp, and the trust between them is blatantly apparent.

Secondary characters are embodied effectively by versatile performers Hai Ha Le and Wes Snelling, both of them chameleons, swapping characters as effortlessly as they switch costume pieces. Music, too, is a character in this piece. Brought to life by musician Wally Gunn, the soundtrack is played live on found objects: noodle bowls and chopsticks emit the soundscape of a busy Asian city, goblets and glass signify the noise and music of an ancient culture. The effect is original, delicate and raw.

As an entertaining piece of theatre, Shrimp is a pleasure; as an experiential history lesson for year twelves, a privilege. The search for self is a familiar endeavour to all, making Shrimp a visceral and vital journey worth taking.