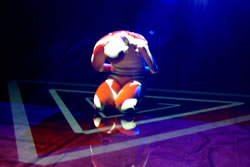 In Mirage, a performance installation by Brisbane-based multimedia company Igneous, dancer James Cunningham uses a combination of dance and data projection to draw the audience into a strange new perceptual space, in which body parts can be transposed, twinned and mirrored, providing new capacity for movement in the face of challenges to a body’s conventional structure and integrity. The work, like Cunningham’s previous collaboration with multimedia artist Suzon Fuks on The Body in Question (1999), is based on Cunningham’s experience after a motorcycle accident in 1992 left him paralysed in his left arm. Both works touch on the perceptions and realities of the human body as it reacts, recovers and rediscovers its potentialities in the wake of injury.

Mirage is a performance installation in two parts, both emerging from the mirage-like perception of movement in a paralysed limb Cunningham experienced in a ‘mirror-box’, a therapeutic device neurologist Dr Vilayanur Ramachandran designed to provide the synaesthetic illusion of movement in a still or missing limb.

The first installation space is a white room, a sideshow hall of mirrors designed to test and manipulate our perception of our own bodies. We are quite literally placed inside Ramachandran’s mirror box, strange angles and surfaces swapping one body part for another, and morphing our body into those of others. Conversation as we wait for the second part of the installation to being suggests people have indeed been left giddy, giggly and confused by these tests to their corporeal and perceptual integrity.

The second installation space is darker, and more abstract. We walk around a triangular pool of water, with cords, cables, scaffolds, screens and a six-foot triangular frame hung around it. These, and Cunningham’s body, become the canvas for the mirroring to come. Turning and moving in the dimly lit space, Cunningham uses one limb to push another, giving it weight and momentum, and with time it becomes less clear which is leading and which following. He plays with a shifting, shrinking, growing doppelganger reflected in the water, on the screens, and on the frame he is constantly shifting and tilting around him. His image doubled, tripled and quadrupled, but at the same time always asymmetrical or truncated in some way. There is a mesmerising quality to Cunninham’s performance, which caught me in an almost visceral recognition of my own capacities as well as his. One striking sequence was a pendular swinging of Cunningham’s paralysed arm, during which I felt foreshadowings of motion in spite of my own arm’s stillness, before realising my own musculature might make this freedom of motion impossible, except in the mirror space made possible here.

Mirage is striking and intriguing in its ability to shift the audience’s own perceptions about body, ability and the assumed perfection of physical symmetry. It is characterised by a seamless integration of Cunningham’s performance, and Fuks’ projections, with Alison Ross’s installation, and Andrew Kettle’s abstract, alchemical soundscape. Worth a look during it’s brief Brisbane season.