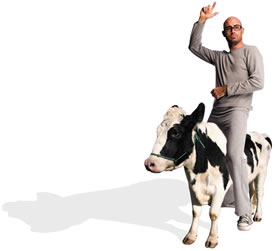 Wearing nondescript glasses and a so-uncool grey tracksuit, Simmons zooms frantically through a mysterious and entertaining series of zany, pointless stores and songs, aided and abetted by some weird film and video and a brilliant soundtrack, with Prokofiev, Ponchielli and Michael Nyman featured. (Actually the interplay between sound and image, while occasionally misfired, produces quite a few startling juxtapositions, eg. Schummann’s Dedication layed behind a film called Maintaining Your Inflatable Pool).

My personal highlights, apart from the talking armchair, include the Moth Monologue, the Bread Shoes, the song about skin (“it keeps you in”), the unexpected pathos of the man who works with orange juice bottles, and best of all, the Duck Diatribe, which begins: “Is that a duck? I specifically asked for no ducks. You know some s**t’s going down when ducks enter the building…” after which Simmons launches into a long and obviously unfair attack on his Most Hated Ducks of History (and there aren’t any he likes).

It’s a relief to see such strange and scatterbrained stuff, mercifully devoid of the dire cliches of the all-pervasive observational humour (‘Don’t you just hate it when’, etc, etc). Simmons doesn’t so much observe then demand our agreement, as reveal his crazed, unreasonable, kindly inner self, and an intriguing one it is. At the close, he seemed slightly worried that the audience hadn’t liked what he has to offer, and there is a sense in which the well-considered electronic, non-human effects of all kinds, together with Simmons’ frenetic, virtually pause-free style, do leave us a bit breathless and unable to respond. However this physically relaxed, vocally versatile performer appears quite in command of himself, us and his utterly individual material, so concern is misplaced. And sure, some of the humour, like most humour, is of the “You’d have to be there” variety, but you should be, so go and see it, please.


A Token Event
The Sex & Science of Boredom
Sam Simmons