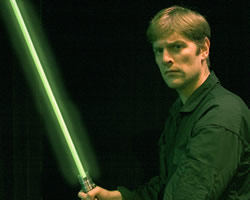 Charles Ross’ supercharged performance is quite literally a tour-de-Force, yet One Man Star Wars Trilogy is unlikely to do much for you if you’re not a Star Wars fan. By “fan”, I don’t mean someone who’s just watched the movies once or twice. I’m talking about a serious fan, someone who has seen the original films many times. Yet we all pale in comparison to Canadian Charles Ross, who claims a mind-boggling 400 viewings of the original film. He is therefore uniquely suited to create a dynamite one-man-show out of his obsession.

Dressed simply in black coveralls, using no props, costumes, make-up or external sound effects, this solo act does the impossible: he acts out Star Wars (A New Hope), The Empire Strikes Back and Return of the Jedi in the space of one hour. He plays every part, produces all the action, and left a very happy audience when he was done.

However, it would be grossly unfair to suggest that Ross is merely trading off the fans’ familiarity with the material. If it were simply a case of parroting well-known dialogue in an amusing fashion the show would be little more than an extended party trick. What makes this show so thoroughly captivating is the way Ross wholistically embodies the films. He physically changes his bearing and mode of delivery at a dizzying pace, striking poses, adopting facial expressions and body language that instantly evoke and thoroughly differentiate each character. His ability to make a totally mimed, one-sided lightsaber duel genuinely exciting has to be seen to be believed.

Beyond just acting out the characters, Ross’ impressive mime skills evoke all kinds of outlandish action. He manages to convey monsters, robots, enormous vehicles and exploding Death Stars with ease, somehow making epic space dogfights instantly identifiable by simply angling his arms in just the right way, much to the delight of the audience. His physicalisation of the collapsing “Imperial Walker” from Empire absolutely brought the house down.

Ross really elevates his mime by peppering the entire performance with vocalisations of Star Wars’ memorable John Williams musical score and Rick Baker sound effects. His whistled R2-D2 beeps and Chewbacca’s growl/yawns are uncanny. He intersperses the snippets of dialogue with humming and scatting of completely scene-specific music and effects cues, all the while miming like Marcel Marceau on speed. If anyone can be described as a one-man multimedia machine, then Charles Ross is it.

This performer certainly knows his audience, and has pitched his show perfectly. Apart from his abundant comic talent, the delight he manages to engender in his viewers stems from his tendency to focus not merely on lines and actions that are important exposition, but rather on the countless little inflections, odd turns of phrase, off-kilter pronunciations, strange sound effects and slightly ripe bits of acting that repeat viewings of the films bring into sharp relief. Everybody knows that Darth Vader says “No; I am your father”, but instead Ross counts on the jolt of recognition that real fans get when he perfectly replicates the obscure noise and motion made by Jabba the Hutt’s intercom.

A lot of Ross’ humour derives from the shared knowledge of what are the most memorable moments in Star Wars when you’ve seen them a lot of times. Needless to say, the performance isn’t an entirely straight retelling of the films; there are some hilarious asides and interjections, such as depicting cowering Imperial officers wetting themselves in fright before Darth Vader, and Obi-Wan Kenobi conceding that, when retroactively taking the later “prequel” films into account, he really is quite a tremendous liar.

It should be said, however, that Ross’ impressions of the original actors’ voices are patchy. His Alec Guinness is marvelous, although his Harrison Ford is only middling and, by his own admission, his Yoda sounds “like a goblin sucking helium.” This doesn’t matter in the least, as what all his characters have in common is perfect intonation. Even where his vocal approximation of the characters is lacking, his ability to replicate their cadence is flawless.

By far the golden throughline of the whole performance was Ross’ crowd-pleasing re-creation of Luke Skywalker. Not only was his Mark Hamill voice absolutely spot-on, his whole take was a play on the fact that, as any repeat viewer will have noticed, Luke isn’t exactly the most stoic hero in cinema history. This prolonged, affectionate jab at the central hero’s foibles and Hamill’s at times somewhat juvenile acting style is an utter delight to anyone who loves, or loves to hate, poor old Luke.

If you love the original Star Wars movies, seeing this show is an absolute must. Don’t miss it!