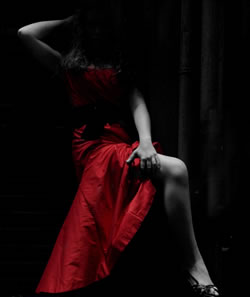 Alexander Productions ‘Carmen, The Musical’ was every bit as sizzling as this worldly opera ought to be, but all too rarely is. Under the visionary guidance of Nigel Jamieson, the internationally acclaimed event and theatrical director, this impossibly young, committed and gifted cast (and crew) deservedly scored ovations for their unforgettable delivery; and deliver they did, with panache, good humour, agility and sublime vocal performances.

More than 120 singers and dancers from across Australasia must’ve been a handful, but the real feat was staging this fully-fledged production on a 9-day turnaround, which, I’m sure, should, by rights, qualify for some Guinness gong.

With a remarkably minimalist stage (a baker’s dozen or so large tables were moved around surprisingly effectively), evocative costumes (one could almost feel the sting of needles inadvertently stuck in fingertips in the flurry to finish ‘em) and cleverly choreographed crowd scenes, the singers were allowed to give their all in their almost wholly successful quest to exploit every delicious moment ‘of burning love, simmering passion and seething hatred’. Sydney summers can be sweltering, but this was but a mildly balmy January evening; yet the sultriness  was utterly inescapable.

Jamieson hit the mark, and then some, in his determination to stage an entirely distinctive version which, for mine, surpassed any number of ‘professional’ productions, thanks to its sense of humour and levity, but also its sheer excellence. Hear, hear to his instict to flout and fly in the face of mindless operatic orthodoxy.

Producer Nicole Alexander brought Mid-Summer Opera to Sydney in 2005. Let’s hope she’s in it for the long haul, if ’007’s effort is any indication of the likely results: a full house, an ecstatic audience, a fulfilled cast & crew and a cool, new, brimming talent pool!

Braddo's Brekky Serial. Anything But Alan Jones. 6 Till 8 Wednesdays & Fridays. Triple R FM 88.5. This email address is being protected from spambots. You need JavaScript enabled to view it.